Osseous surgery, sometimes referred to as pocket reduction surgery, refers to a number of different surgeries aimed at gaining access to the tooth roots to remove tartar and disease-causing bacteria.

The specific goals of osseous surgery include:

What does osseous surgery entail?

A local anesthetic will be used to numb the area prior to surgery. First, Dr. Wu will cut around each tooth of the affected area to release the gum tissue from the bone. This allows access to the bone and roots of the teeth. After the roots have been thoroughly cleaned through scaling, a drill and hand tools will be used to reshape the bone around the teeth. Bone is removed in some areas to restore the normal rise and fall of the bone, but at a lower level. Bone grafting may also be necessary to fill in large defects.

Next, the gums will be placed back over the remaining bone and suture them in place. The site will also be covered with a bandage (periodontal pack) or dressing. Pain medicine and mouth rinses containing chlorhexidine are generally prescribed following the surgery.

Do not be alarmed if bleeding and swelling occur after the surgery. This can be controlled easily by placing an ice pack on the outside of the affected area. In cases where the bleeding and swelling is in excess, it is advised that you call to notify our office. Several follow up visits may be necessary and you must fulfill a meticulous maintenance program especially during the initial phases of healing to avoid post-operative infection.

Why would I need crown lengthening?

Crown lengthening is usually performed to improve the health of the gum tissue, prepare the mouth for a procedure, or correct a “gummy smile”. A “gummy smile” is used to describe an instance where teeth are covered with excess gum tissue resulting in a less esthetically-pleasing smile. The procedure involves reshaping or recontouring the gum tissue and bone around the tooth in question to create a new gum-to–tooth relationship. Crown lengthening can be performed on a single tooth, many teeth, or the entire gum line.

Crown lengthening is often required when your tooth needs a new crown or other restoration. The edge of that restoration is deep below the gum tissue and not immediately accessible. It is also usually too close to the bone or below the bone.

About the Crown Lengthening Procedure

Crown lengthening takes approximately one hour but will largely depend on the amount of teeth involved and if any amount of bone will need to be removed. The procedure is usually performed under local anesthetic and involves a series of small incisions around the tissue to separate the gums from the teeth. Even if only one tooth requires the procedure, it will probably be necessary to adjust the surrounding teeth to enable a more even reshaping. In some cases, extraction of a small amount of bone will be necessary as well.

When Dr. Wu is satisfied that the teeth have sufficient exposure and the procedure is completed, the incisions will be cleaned with sterile water. Sutures and a protective bandage are then placed to help secure the new gum-to-tooth relationship. Your teeth will look noticeably longer immediately after surgery because the gums have now been repositioned. You will need to be seen in one or two weeks to remove the sutures and evaluate your healing. The surgical site should be completely healed in approximately two to three months following the procedure.

When recession of the gingiva occurs, the body loses a natural defense against both bacterial penetration and trauma. When gum recession is a problem, gum reconstruction using grafting techniques is an option.

When there is only minor recession, some healthy gingiva often remains and protects the tooth, so that no treatment other than modifying home care practices is necessary. However, when recession reaches the mucosa, the first line of defense against bacterial penetration is lost.

In addition, gum recession often results in root sensitivity to hot and cold foods as well as an unsightly appearance of the gum and tooth. When significant, gum recession can predispose to worsening recession and expose the root surface, which is softer than enamel, leading to root caries and root gouging. 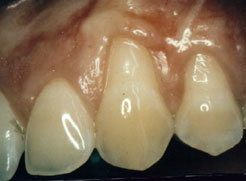 before and after gum grafting

A gingival graft is designed to solve these problems. A thin piece of tissue is taken from the roof of the mouth or gently moved over from adjacent areas to provide a stable band of attached gingiva around the tooth. The gingival graft may be placed in such a way as to cover the exposed portion of the root.

The gingival graft procedure is highly predictable and results in a stable, healthy band of attached tissue around the tooth.

A frenum is a naturally occurring muscle attachment, normally seen between the front teeth (either upper or lower). It connects the inner aspect of the lip with the gum. A lack of attached gingiva, in conjunction with a high (closer to the biting surface) frenum attachment, which exaggerates the pull on the gum margin, can result in recession. Additionally, an excessively large frenum can prevent the teeth from coming together resulting in a gap between the front teeth. If pulling is seen or the frenum is too large to allow the teeth to come together, the frenum is surgically released from the gum with a frenectomy. A frenectomy is simply the surgical removal of a frenum.

When Orthodontic treatment is planned or initiated, the removal of an abnormal frenum, with or without a gingival graft, can increase stability and improve success of the final orthodontic result.